Can Someone Be Arrested for Just Being Close to Drugs?

Can Someone Be Arrested for Just Being Close to Drugs? The short answer is “no”. However, there is a case out of the Third District Court of Appeal that, while recognizing the legal principal that mere proximity to illegal narcotics does not provide probable cause for an arrest, it comes very close to allowing persons to be arrested for close proximity.

In J.J. v. State, 45 Fla. L. Weekly D1804a (Fla. 3d DCA 2020), J.J. was sitting in the kitchen in close proximity, about 2 feet, from crack cocaine which was being cooked on the stove. Law enforcement, who had entered the residence on a valid search warrant, discovered J.J. in this position. There were several other people in the kitchen as well. Because of J.J.’s proximity to the crack, he was arrested for possession of cocaine. In a search incident to arrest, they found marijuana on J.J.’s person. Ultimately, he was not prosecuted for possession of cocaine but he was prosecuted for the possession of cannabis. His attorney filed a motion to suppress arguing that the search of his person was illegal. If the court were to grant the motion, the marijuana would be disallowed into evidence and that State would be left without evidence with which to prosecute J.J. 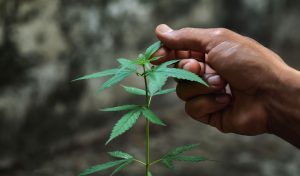 The Supreme Court of the United States set up a standard to be used in Fourth Amendment analysis when dealing with arrests based on constructive possession. In Maryland v. Pringle, 540 U.S. 366, 373 (2003), the Court established a “proximity plus” test. It states that probable cause will be established if the State can show that, in the totality of the circumstances, the defendant is (1) in close proximity to the drugs,  (2) in a private location such as a home, automobile, hotel room, etc., and (3) occurring during an enterprise to which a dealer would be unlikely to admit an innocent person with the potential to furnish evidence against him. In other words, there is probable cause that the person arrested is participating in the criminal enterprise.

As such, the Third District Court of Appeal held that the search of J.J. was legal and that the State would be permitted to introduce the cannabis into evidence. J.J. was physically close to the drugs and was closer to the drugs than any other occupant, the cocaine processing operation was taking place in a room in the privacy of a house enhances the probability that only trusted members of the operation had access, and the fact that the drug operation was openly on display, enhances the probability that J.J. had both knowledge of and some participation in the operation.

Why Wasn’t J.J. Charged with Possession of Cocaine (drugs)?

Ultimately, J.J. was only charged with the cannabis because that was found on his person. In order to prove a case beyond a reasonable doubt, a standard much greater than probable cause, the State must prove more than proximity to the narcotics. The Pringle standard doesn’t do much to expand upon that standard except to say that proximity (because the other factors, in this author’s opinion, do not add much to the analysis) can be sufficient for an arrest. In order to convict J.J. of the cocaine, he would have had to admit ownership of it, someone else would have had to testify that it was his, or there would have had to be physical evidence that it was his such as fingerprints, DNA, etc. In a jointly occupied room or space, if the State cannot exclude possession by someone else, they generally cannot convict anyone of its possession.

First and foremost, don’t possess illegal drugs; it’s against the law and can land you in prison. Second, if you do find yourself in a situation where you are near narcotics, get away from those narcotics. As J.J. shows, you can be arrested just for being around drugs. Third, if you cannot get away from the narcotics for whatever reason, do not be carrying anything else illegal on your person. While you might get arrested for being close to drugs, you have a strong chance of not being convicted for being in close proximity. However, the arrest will give law enforcement the ability to search your person. Anything illegal found on your person will serve as strong evidence to convict you of a crime. Lastly, don’t answer any law enforcement questions without your attorney. Give board certified criminal trial law attorney Adam Bantner a call at 813.397.3965 before making any statements. Follow these guidelines and you stand a good chance of staying out of trouble.