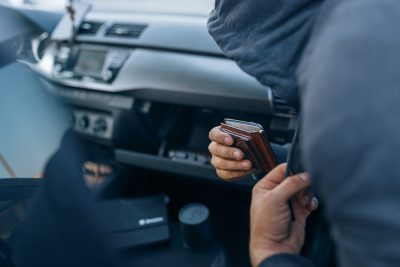 guilty of the more serious offense.

The full text of the statute is below.

(2) Any person who initiates, organizes, plans, finances, directs, manages, or supervises the theft of property and traffics in such stolen property shall be guilty of a felony of the first degree, punishable as provided in ss. 775.082, 775.083, and 775.084.

Can a Person be Convicted of Theft and Dealing in Stolen Property?

Fla. Stat. 812.025 states, “Notwithstanding any other provision of law, a single indictment or information may, under proper circumstances, charge theft and dealing in stolen property in connection with one scheme or course of conduct in separate counts that may be consolidated for trial, but the trier of fact may return a guilty verdict on one or the other, but not both, of the counts.”

This statute begs the question, “What is one scheme or course of conduct?” Case law, jury instructions, and logic tells us that it means that “there was no meaningful disruption of the defendant’s conduct by either an interval of time or a set of circumstances.” Fla. Std. Jury Instr. 14.2. It has been held that a period of four days between the theft and the dealing still constituted by a single course of conduct. Stallworth v. State, 538 So. 2d 1296 (Fla. 1st DCA 1989).

In Bradshaw v. State, case No. 1D17-4992 (Fla. 1st DCA 2019), the Court held that the theft of sawblades by an improvement store employee followed by a sale by that employee of the sawblades to a customer later in the same day was but a single course of conduct. As such, the Court remanded the case back to the trial court for the vacation of the petit theft conviction.

In case where a person has been improperly convicted of both by the judge and/or jury, the proper remedy is to vacate the conviction of the less serious charge, which is almost always the theft count.

If you’ve been arrested on charges of Dealing in Stolen Property, give The Bantner Firm a call at 813.397.3965 to schedule your free consultation. These are serious charges and you need to trust your freedom with board certified criminal trial attorney Adam Bantner!